This happy 2D figure is of course none other than Read-A-Roo, UNC-TV’s longtime children’s programming mascot. Now a fixture of Rootle, Read-A-Roo can be seen online, on telly and in person at community events (plus on the wall in our Kids & Education Department as seen below). If your kids don’t know Read-A-Roo, you’re not exposing them to the right kind of television! 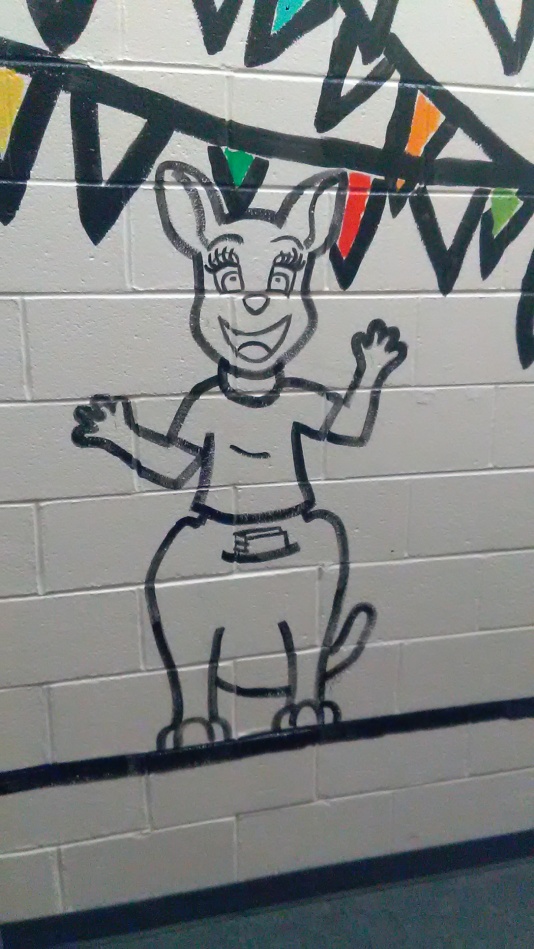 Who was the original Mr. Rogers?

As most people know, the long-running children’s series MISTER ROGERS’ NEIGHBORHOOD helped generations of young kids understand themselves and the world a little bit better. It fostered imagination and gave preschoolers insight into their emotions. It also made Fred Rogers a household name and a national icon.

But not everyone knows that Fred Rogers wasn’t the original Mister Rogers. Fred created the show and served as executive producer, however the folks at WQED initially had reservations that his personality was magnetic enough to attract viewers. Another actor was hired to play “Mr. Rogers” and reportedly did a good job. However, when this original host got food poisoning, Fred filled in and the station bigwigs agreed Fred’s gentle, personable approach was exactly what the show called for. The rest is, of course, history. END_OF_DOCUMENT_TOKEN_TO_BE_REPLACED

Name an EGOT winner who has made a guest appearance on SESAME STREET.

Continuing the SESAME STREET celebrations with an intriguing question about the celebrities who cameo on this beloved, long-running children’s series. Over the decades, SESAME STREET has welcomed actors (James Earl Jones, Sandra Oh), athletes (Bo Jackson, Tony Hawk), musicians (Paul Simon, Alicia Keys), dignitaries (Kofi Annan, Buzz Aldrin) and even First Ladies of the US (Hillary Clinton, Barbara Bush). You may have your favorite appearance, whether it’s James Taylor singing “Your Grouchy Face” to Oscar or Ian McKellen helping Cookie Monster to resist eating a cookie. Wikipedia lists hundreds and that is probably an incomplete list.

However, three of these guest stars have the distinction of being EGOT winners as well (although it is entirely likely they may not have been EGOT winners when they made their appearance, if you understand the concept). You know the EGOT – that elusive conglomeration of awards referring to the Emmy, Grammy, Oscar and Tony. It takes a prestigious talent to achieve EGOT status (less than 20 people have done so thus far). END_OF_DOCUMENT_TOKEN_TO_BE_REPLACED

The Rootle team is organizing another Block Party Live event for later in the month. This time, it’s in Chapel Hill, right on our doorstep. So bring the family out for music, stories, activities and loads more. We’ll see you then! 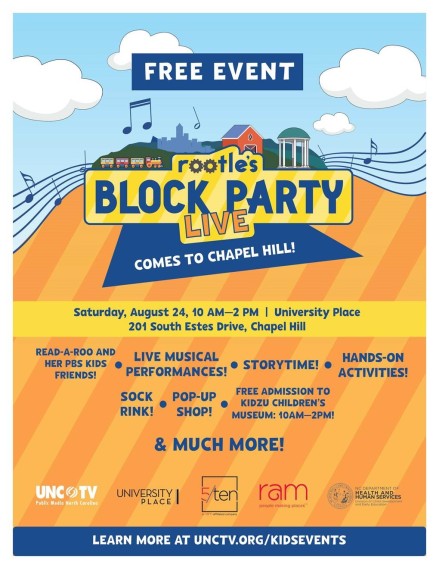 Bring the family and join us a Block Party Live on Saturday in Greensboro.

You may know this helpful young lass. She’s Arthur’s sister D. W. and, right now, she’s directing you towards our Kids & Education department. Those are the folks that you’ll often see out and about in schools and at community events to promote UNC-TV and especially Rootle, our Kids Channel. They have lots of cool toys and are best pals with Read-A-Roo. 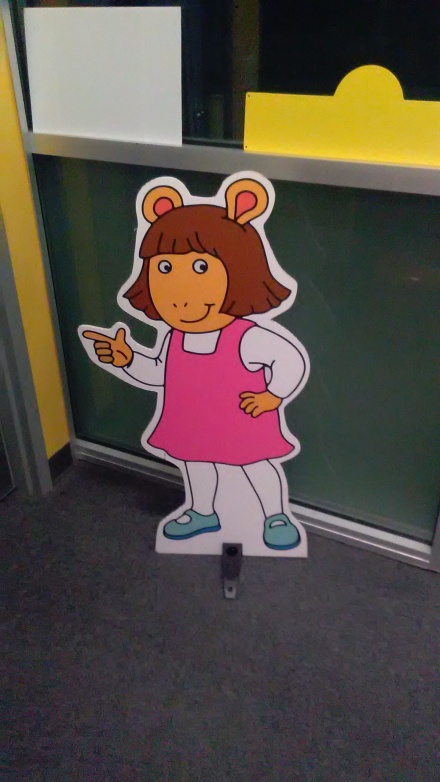 You may recognize this guy from the hit PBS Kids show WILD KRATTS. Yep, it’s Chris Kratt – or is that Martin Kratt? No, I think it’s Chris. I going with Chris. Anyway, It’s Chris Kratt in animated form. To be precise, it’s a representation of the animated Chris Kratt in 2D cut out form. This stand-up figure is used at local kids events, Rootle celebrations, Read-A-Roo Block Parties and the like. I snapped this particular pic after the Rootle gang returned from the State Fair.

What’s happening, what’s on and what’s interesting this week …

Travel the Tar Heel State and meet four senior citizens striving to better themselves and their communities. Catch BOOMING – Tuesday night at 9 on the North Carolina Channel and Thursday night at 8 on UNC-TV.

Eric Idle is writing a memoir – a sortabiography – and it’s due out in the fall. END_OF_DOCUMENT_TOKEN_TO_BE_REPLACED

If you’re in or near Hickory this weekend, drop by our Read-A-Roo Block Party Live event! I could tell you all the awesome reasons why you should but this flier will do the job for me. See you there!